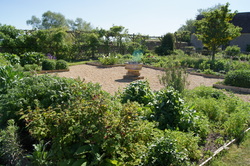 Henry the Poet's Garden
Henry’s garden list is made up of four sections, suggesting that the garden was in a courtyard. We chose this site because it is enclosed on three sides, giving the feeling of enclosure that comes with a courtyard. The rose covered tunnel arbour and the flower bed along the opposite side add extra colour and scent.

Henry’s plants seem to have been chosen for their medical uses, which remained unchanged until the time of Nicholas Colnet.Where there is any uncertainty as to which plant is meant in the original documents, we have also planted the possible alternatives.

There are some omissions in our garden. Bindweed and nettles are too invasive and as they grow naturally elsewhere in the manor grounds, we did not plant them in this garden. We also removed dittander, Lepidium latifolium, as that has also proved too invasive to keep under control. The dittander is edible but was used as a skin wash for problems such as leprosy.