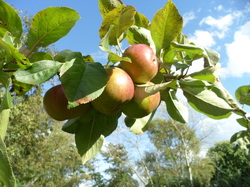 There are very few medieval  pictures of  orchards, but documents reveal that they were often bounded by walls, hedges, wattle and sometimes by moats.
Orchards were prized for their blossom in the spring, shade in the summer and the fruit at the end of the year. Apples and pears were brewed to make cider and perry. Most people drank alcohol because the drinking water was often not of good enough quality to drink.

Apple, pears, medlars, walnuts, hazel nuts, mulberry, service trees, quince and cherry trees were all part of the medieval orchard.
We have planted a medieval apple called Couer de Boeuf. It keeps well and can last until the early spring if you wanted to use it in cookery.

Crescenzi said that you could include an orchard as part of your decorative gardens if you could not afford a Pleasure park. he said that you should mow the grass twice a year.
The ninth century St Gall plan of an ideal monastery also shows an orchard that was also a cemetery.

A prebendal manor in Yorkshire is described as having “a goodly orchard with walks” and topiary.

The bishop of Bath and Wells spent over £4000 in the middle 15th century on building and planting his orchard.

A  1649 inventory of the Prebendal Manor, Nassington refers to an orchard, which may have been on the site of the present orchard.