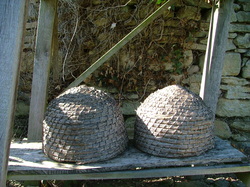 Our small vegetable garden would not have provided enough food for the manor during the medieval period – nor even for the present one. Most of the food plants would have been grown in the fields around the manor.

Our garden shows some of the food plants and the ones used for dyes.

The leafy plants would not have been cut off whole as we tend to do now. Instead, all the leaf plants would have had a only few leaves harvested at a time. This would mean that each plant could be productive for most of the season without having to be replaced.

Most of our vegetables would probably go into pottage, a vegetable stew. For the wealthy this would include meat for protein. Poorer people would have pottage with beans or peas for protein.  The peas and beans were mostly dried for winter use during the medieval period. It is not until the Tudor times that peas tended to be eaten fresh.Bees would provide wax and honey for the wealthy. Only people of high status and the church would use bees wax for candles. People of low status would use tallow in dishes with a wick or a rush light.