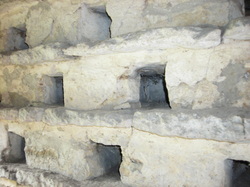 A dovecote is a medieval Factory Farm unit, designed to produce as many doves as possible.

A dovecote was an expensive building. Firstly a license had to be obtained from the king in order to have permission to build one. This, of course, was not free. Then a great deal of money would be required to build the dovecote. The walls are very thick to house the nesting chambers, so a considerable amount of building stone had to be quarried.

In a good year each pair of birds could produce seven or eight clutches of eggs a year. A clutch is usually a pair of eggs at a time.

The doves were kept to provide meat, not eggs. Hens and ducks produce much larger and more useful eggs.
The young doves, known as squabs, would be collected before they could fly so that they remained fleshy and tender. Adult flying birds have tough muscles built up by flying and take much longer to cook than the tender squabs.

To collect the young birds the entrance in the roof would be closed. In round dovecotes there is usually a central pillar that holds a frame and ladder that could be pushed around the inside of the dovecote. One or two people could push the frame, whilst one person could remain on the frame to collect the squabs. In rectangular dovecotes a ladder would be required. The protrusions from the walls are for the doves to perch on. They are not for climbing the walls to collect the squabs. I have tried to do this and it was difficult enough to climb the walls, let alone collect squabs too.