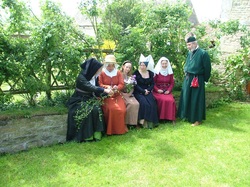 Albertus Magnus said that there should be a bench in your Pleasure Garden. Odd as it may seem to us, the seats in gardens were not benches that could be moved around depending on the weather. They were permanent structures constructed like a raised bed. The sides could be made of wattle fencing, wooden planks, stone or later brick. Soil would be poured into the container and turf with wild flowers could be grown on top. The use of cushions is not seen in any of the illuminations showing turf seats.

Small garden areas such as this are often known as a ‘Hortus Conclusus,’ a secret or enclosed garden. The Virgin Mary and the baby Jesus are often depicted in a turf seat area. Sometimes a few female saints are also present, enjoying themselves by reading or making a circlet of roses to wear on their heads. The roses are in full bloom, the sky is bright blue. It never rains in medieval gardens if the artists are to be believed.