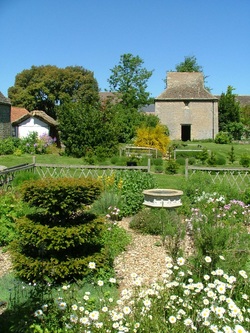 The Trellis Herber is a purely decorative garden. Pietro de Crescenzii copied the earlier writings of the cleric Albertus Magnus to describe a Pleasure Garden as a place where the plants would delight the senses and were for enjoyment only. The plants were the same ones that may be grown elsewhere for medicinal or other uses, but in a Pleasure Garden they would not be harvested.

The fountains of the medieval period would not generally have had jets of water shooting into the air. The hydraulic technology of the Romans had been lost, so fountains would either bubble onto the surface of the fountain bowl or the water would be taken to a height and allowed to fall.

It is thought that cisterns on a nearby wall would provide the height needed to power the fountain by gravity. In order to conserve water the fountains would only operate for short periods of time when important people were in the garden. A similar system is still in use at Chatsworth today.